In the previous post I argued how gamification offers, among other benefits, the opportunity to beta-test unfamiliar assessment methods until an instructor is satisfied with the assessment tool to the point of implementation in the main portion of the course.

An example of this approach for me has been the deployment of Concept Maps. I am in my third iteration of their use in my courses and I still keep them relegated in the gamified portion of the course…I will explain why a little later.

Metacognition or the awareness of thinking about a concept is a tool that can solidify long-term knowledge which should be, I would argue, one of the main objectives of learning at the college level certainly for STEM disciplines. Despite their introduction several decades ago, concept maps remain a tool that is inexplicably underutilized, especially in STEM. I believe that concept maps in sciences and engineering have the potential to be more than metacognition. In a way, I find the definition of metacognition (i.e., the awareness of one’s thought process) limiting when applied to concept maps. Concept maps can, in fact, be implemented to elicit critical thinking — not just the process of thinking.

So, in concept maps students are not only required to think about their own thinking regarding a topic or a concept, but they can be prompted to connect-the-dots and identify misconceptions.

In my case, I also use them to help students understand that concepts are evolving during the semester as they gather more information. Thus, in a way, it could be used as a component to a growth mindset approach to teaching.

So, how does it all come together for my course?

I request students to complete two separate concept maps on two topics. For instance, in the first semester of introductory physics, I may ask them to create separate concept maps about force or energy  or momentum or periodic motion. Meanwhile, in the upper-division thermodynamics courses, topics may include entropy or temperature. These topics can reveal a significant degree of misconceptions but they can also help to decompartmentalize the material of a semester. All of the concepts mentioned above encompass a broad range of topics that force the students to keep track of them across, for instance, different chapters of the textbook.

In addition, the topics are not only broad but they probe the level of sophistication of a student’s thinking since learners can compare what they understood about these concepts in introductory classes with the more rigorous definition/description that they acquire in the upper division class.

I always like to bring my own twist to these activities, thus, instead of using the concept map as a single summative data point that probes a learner’s knowledge of a concept, I ask them to repeat the exercise three times during the semester as I add more material.

Often, students who develop a sophisticated understanding of the topics are able to merge the maps at the end of the semester.

Students receive game points (typically five) each time they submit a concept map. The points count towards the leaderboard, badges and rewards. However, the real focus of this exercise is for the students (and for me) to become aware of their thought process and its evolution. As mentioned before, they can detect common misconceptions early on — believe me, there are many when it comes to fundamental physics concepts. After they identify those misconceptions, they can be addressed in class or with other instructional tools.

Student feedback surveys also indicate an additional benefit: students actually have fun creating them and seeing how a concept evolves from the beginning to the end of the semester. There are several tools that students can use to create concept maps from the very basic way of drawing them on paper to using more sophisticated tools available through Adobe Creative Cloud. Instructors can let them choose the software that they prefer or present them with specific tools as well as UTSA tutorials on how to use them (including these free concept map templates from Adobe Express).

I have left students free to design the maps the way they prefer, but you could instruct them to use a specific tool (such as Adobe Illustrator, which I show here). 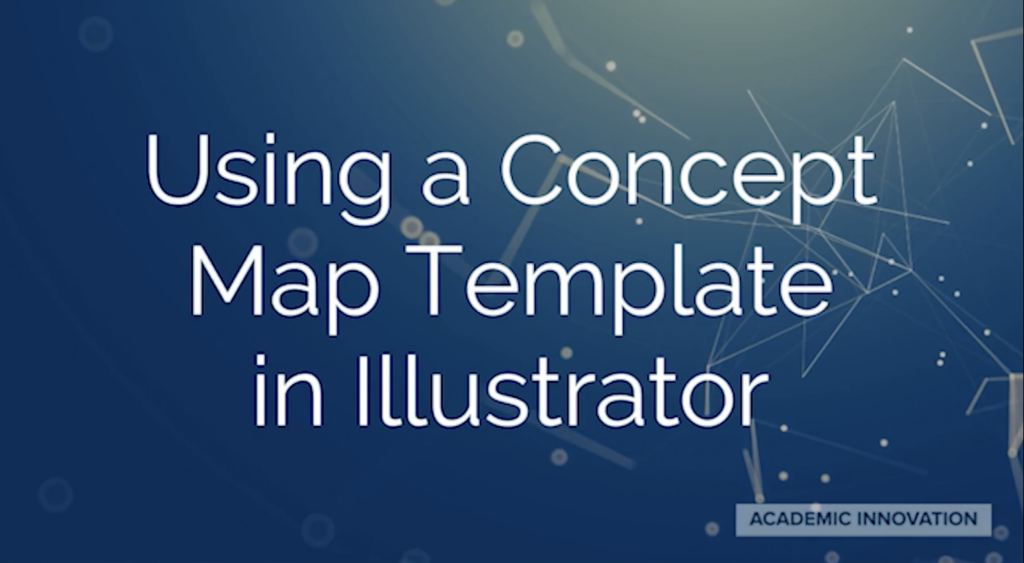 The resulting work has been very different, but the students have enjoyed the creativity portion of it — somewhat unexpected in a physics course. (which circles back to identifying misconceptions, in this case that, in fact, there is plenty of creativity in physics and we have a need for creative individuals in the physics field.)

Here are some examples of early concept maps.

Still some wrinkles to iron out….

For now, I have relegated the deployment of concept maps to the gamified portion of the courses because I have not found a satisfactory grading schema that would allow me to deploy them as regular assessment activities. I would like to find a fair schema that would assign a grade based on the evolution of the maps from the beginning to the end of the semester but having to consider the different starting point of learners.

Actually, I could use your feedback: What do you think would be a fair grading approach for concept maps that are expected to evolve between the beginning the end of the semester? Email me at: lorenzo.brancaleon@utsa.edu

If you have questions, have tried this in your class, whether graduate or undergraduate level, or want to be featured for your engaging assignments or activities, innovative teaching tips, reach out to Lorenzo Brancaleon at lorenzo.brancaleon@utsa.edu. We want to hear from you!

Join this inaugural faculty panel to explore how to transform learning by engaging undergraduate and graduate students in a more interactive, creative, and collaborative environment in all course modalities. Through gamification, learners are challenged to work more toward mastery than grade-based academic achievement. This can lead to a more meaningful and deeper understanding of [...]

The Faculty Coffee Hour is designed to provide faculty members with the space to discuss current issues they are facing in an inclusive and supportive environment. During these sessions Faculty work together on finding solutions, connecting to resources and encouraging diverse perspectives and ideas. Creating an inclusive learning environment is important to us. To [...]

Join Academic Innovation to chat about how you can engage your learners via active learning techniques and experiential learning. We will provide you with hands-on personal experiences and ask you to incorporate what you learned to apply to your classroom materials. As a result, we will create a welcoming classroom environment that is engaging [...]

Academic Innovation will be providing office hours for faculty to help with any teaching support needs for midterms. Creating an inclusive learning environment is important to us. To request an accommodation, please email DigitalAccessibility@utsa.edu one week prior to your scheduled training. [...]

Academic Innovation will be providing office hours for faculty to help with any teaching support needs for midterms. Creating an inclusive learning environment is important to us. To request an accommodation, please email DigitalAccessibility@utsa.edu one week prior to your scheduled training. Register and Join [...]

In this UTSA Libraries & UTSA Academic Innovation sponsored panel, hear perspectives on open educational resources (OER) from a variety of UTSA stakeholders. UTSA Student Government will share the stresses of textbooks and why OER are a great fit for UTSA students. UTSA faculty will share how they are creating OER for their courses: [...]

Academic Innovation will be providing office hours for faculty to help with any teaching support needs for finals. Creating an inclusive learning environment is important to us. To request an accommodation, please email DigitalAccessibility@utsa.edu one week prior to your scheduled training. [...]

Academic Innovation will be providing office hours for faculty to help with any teaching support needs for finals. Creating an inclusive learning environment is important to us. To request an accommodation, please email DigitalAccessibility@utsa.edu one week prior to your scheduled training. Register and Join [...]